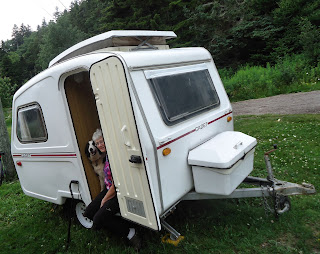 With just a few problems to address...well actually a complete gut job was looming...The first peek behind the ugly gold rat fur showed crumbling disintegrated foam insulation and a lot of goo on the fibreglass. 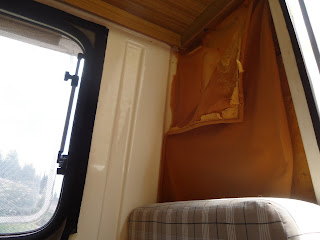 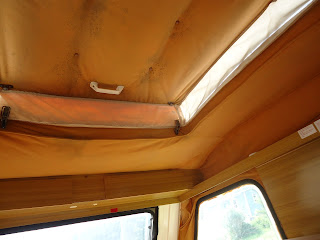 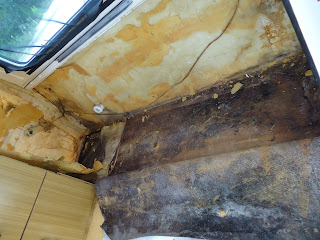 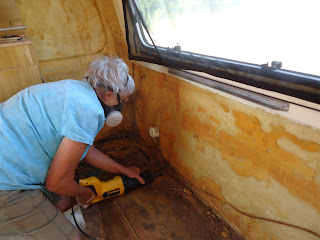 So I started removing everything screwed down, cursing the Polish guy who had used slot screws, and narrow slots at that. Didn't we have Robertson's in those days ? I pulled out the cloth and the mess of foam bits behind, which turned into sticky goo when stepped on. The plywood under the front window was rotted so it got replaced with new pressure treated. Pulling back the old linoleum revealed a backing that looked like moldy muskox hair, so that had to go. 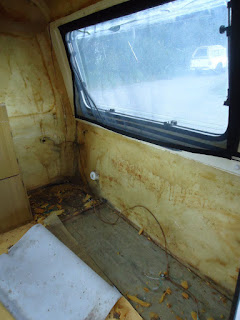 Over the front and back windows were storage cubbies with smallish doors that seemed pretty inefficient so they had to go. Besides I thought the imitation wood grain was a bit much. I kept at the rat fur/foam bits removal til all that was left was the pop top and fly screen. This is definitely a good face mask job. 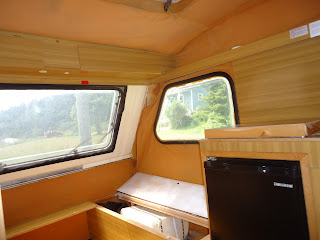 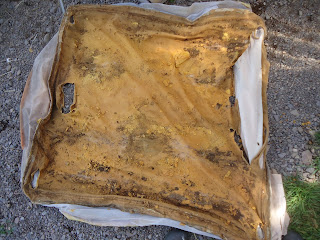 This is the inside of the pop top liner....ewww...black mold from water seeping  through some  screw holes. 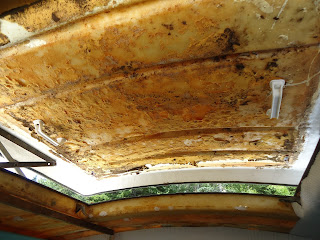 And this was the crud left inside the pop top. Luckily I had family visiting about this time and my son went at this with a wire brush in my portable drill. I wire brushed most of the horizontal parts and my brother and sister-in-law arrived to put 2 long days into the rebuild.
'We covered the fibreglass with a Reflextix type of construction bubble wrap, shiny foil side to the shell and white side visible. The white walls were then covered with a neutral colored man made awning type fabric. We found water based contact cement with no odor at all, at Home Depot and it stuck the layers SO much better than the stinky voc stuff!
With just two of us we didn't need 2 tables so decided to make a storage bin and a pull out bin on wheels between the rear bench seats. I didn't want to use the original cushions as a bed because of the fire proofing chemicals that would be in them, which we would be breathing in. So I planned for a blow up air bed that is light and easy to flip up for access to the storage bins. 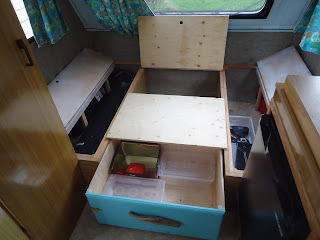 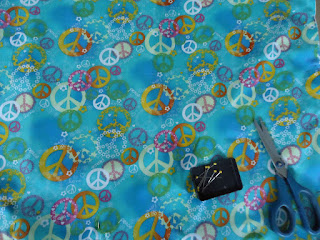 This wonderful fabric for curtains became the basis for the color scheme. I just added another layer to the existing curtains. 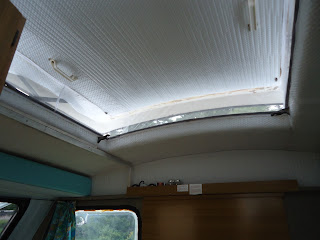 The ceiling and pop top recovered, with the bubble wrap. I got new screening and sewed double wide bias tape on each edge, then contact cemented it in place. Originally only 2 sides had screening, now with screen all around there is better air flow. 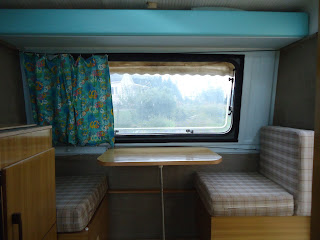 At the front and back I replaced the wood grain cubbies with an 8" wide pine base at the front and a 10" wide base at the back. The front boards are 6" pine with a routed decorative edge and hinged in 3 places with European hinges so they snap up into place when closed. 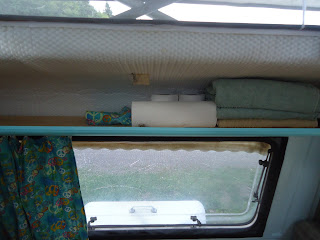 The underside is painted the same pale blue/green as the window surrounds and the fronts are painted aqua like the rolling drawer front. There is so much more practical access than there was before and I love the colors.
I was wary of painting the window surrounds as it is very shiny plastic but the HD paint lady said go with homemade chalk paint, dirt cheap and here's the recipe : Buy a $3.00 sample of your color choice. Mix in half a cup of plaster of paris and half a cup of water. It works !! Holds tight with no sanding! 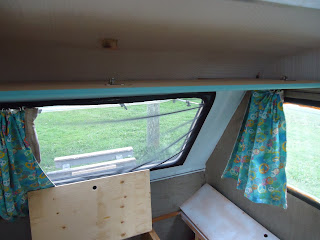 Rear cubby with front door down. Clean and neat inside with the bubble ceiling.. 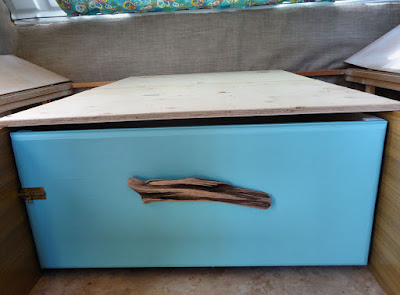 The rolling storage drawer with a handy driftwood pull. 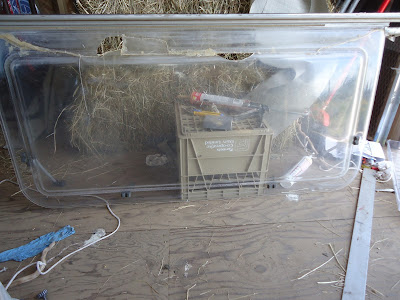 A common problem with a Cadet trailer is a previous owner forgetting to fasten down the front window before taking off down the road with it flapping in the wind. This one had a break right across the plexiglass, held together with packing tape. The biggest part of the repair was getting the gooey tape residue off. I edge glued the pieces together (somewhat) with a PL type glue and left it overnite. Then I applied a patch with a fibreglass patch kit from Princess Auto. To cover the messy finish I got some die cut decorative painters tape and spray painted the repair white. 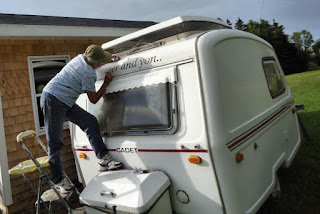 A bit of flair to distract from the less than perfect window repair... The fibreglass patch is strong and rigid so I am pleased. 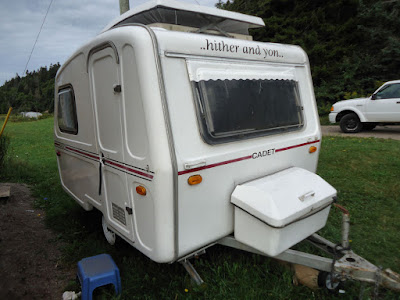 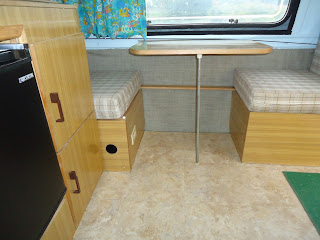 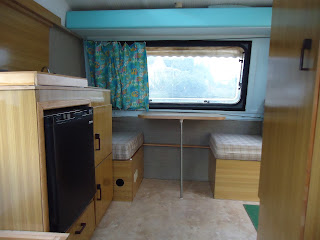 My brother did a great job on the floor, sanding off the crud from the old linoleum and applying peel and stick tiles. So clean and tidy. 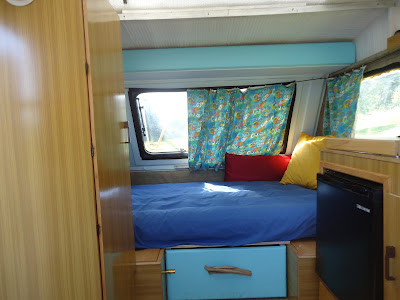 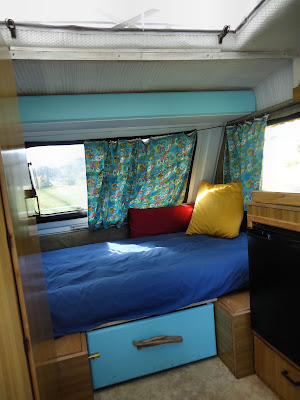 Posted by Lovethiscottage.blogspot.com at 5:50 PM 4 comments: